Last summer, my daughter’s friend moved out of the country and had a cat who unexpectedly gave birth to a litter of kittens right before they left. My softie heart bled for those poor little kittens, and I decided that we should take the mother cat and all six kittens so they could have a chance at life. We fed the mama, let her feed her babies, and cleaned up after them. A lot. We gave the kittens baths at the outset and treated them for fleas so they wouldn’t be “exsanguinated” by the nasty little bugs, as a vet friend warned could happen otherwise. We cleaned some more. We had fun with those kitties and got exasperated as well. About two and a half months later, after finding homes for a few and not succeeding with the others, I took them in to the SPCA, fairly confident that they could be adopted, healthy as they were and still cute but able to eat and use a litter box. I had done my best by them, by golly.

I’ve found myself experiencing the same tug at my heart as I drive by homes in my town, particularly old ones, that have been left by their owners or occupants, most likely all because of foreclosure. They look so forlorn, their windows boarded up, their lawns growing tall. It doesn’t take long at all for a house to look derelict. I just want to buy them, somehow, and refurbish them. I’m not a house flipper; I happen to own one rental house, only because we lived in it, moved across country, and then couldn’t sell it. But I’m not an “investor.” I don’t look at houses and see investments or dollar signs or income. I see history and lives and stories.

My early years set me up for this love of mine. My parents ended up buying or renting old homes when I was a child in Pennsylvania. I remember all the neat nooks and crannies of the houses and the land they sat on (we invariably lived out in the country somewhere). So many locations for hiding, for exploring, so many stages for my imagination to create wonderful sets on.

I remember just looking at this house before we moved in and being in awe of its age, all the stories that somehow seemed to be hiding within its walls, bits of the plots or characters almost seeping out before my eyes. It had a wonderful hallway/landing at the top of the stairs around which clustered the bedrooms. If you walked all the way around the landing to the right, you’d be standing immediately above the downstairs entryway. And there was a door to the attic. The first room at the top of the stairs was originally a bedroom, but somewhere along the way it had been “modernized” to become a plumbed bathroom. So it was a good-sized room, with a clawfoot tub just sitting on one side and a sink and toilet deposited there as well. Ah, the space! The house was so old it either didn’t have closets, or they were tiny, so we had to use armoires. I did enjoy that house. It broke my heart when 20 years later I drove up to that area with my husband and first two daughters and tried to find the house, only to discover it had been replaced by a subdivision (shudder!). How dreadfully boring and unoriginal! I felt so sorry for the people who lived in those dull new houses and for those who would never get to explore the old homestead.

After that, we moved into the house “on the mountain,” only reachable via dirt and gravel roads which were nearly unnavigable in wintertime. Dirt roads covered with slick ice and snow that go up and up do not make for safe driving. The house itself wasn’t quite as cool as our previous house, but the whole mountain was our playground, and it was just as fun in snowy conditions as it was when all was green.

My husband grew up, however, in suburbia, in tract housing that was, frankly, boring and generic compared to what I had grown up with. Over time, I converted him to my way of thinking. We were very excited to be able to find a wonderful old place to rent for our first house as a married couple.

It was Tudor style and a solid 70 years old and had such neat touches: there was a milk-delivery slot on one side of the home. Useless to us nowadays, but cool! It was just a reminder of what the house had seen, what life had been like in its early days. It had hardwood floors and lovely built-ins and a very old but pretty wool carpet in the living/dining room area. I did love that house. It reminded me of my childhood homes and just the notion that something made of wood and plaster can feel like it’s a living, breathing thing, full of history and character.

We moved out of California back East, away from the land of layers of big-city suburbs and stucco, to small towns and wood/vinyl siding or brick. There we were able to buy our first house. It was modest in size but was older, with hardwood throughout and nice character. After eight years there, we just happened to drive by a house that had a little “for sale by owner” sign in the front. We weren’t planning on moving; hadn’t even thought about getting a different house. But I just couldn’t help but look. When I walked up the staircase and got a glimpse of the rooms upstairs, it just gave me the same feeling I’d had walking up the stairs of that old, long-gone house I lived in as a child. I couldn’t help but buy the place. 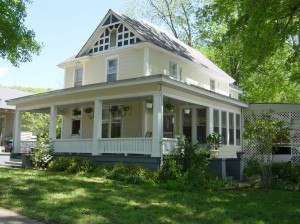 It was 100 years old when we bought it, with all kinds of wonderful touches. It had a porch all the way along the front and a barn in the back, even though it was “in town” on a main road. Everything else just grew up around it over the years, I suppose. We got in there and just rehabbed it. We painted all the rooms inside and then redid the two bathrooms, adding an antique clawfoot tub to the downstairs bath, which was large enough but somehow only had a toilet and sink (and just cried out for a clawfoot). We painted the outside eventually. We did so much to it and for it. It was beautiful, and it had such character.

But we left it behind. Now we live in a wonderful house that has some neat touches and isn’t a tract; it’s a 20-year-old custom home. It’s needed some work, too, which we’ve lovingly provided, a bit at a time. But as I drive around town and see some of the older houses here, I think, Oh, come to Momma, let me take care of you! I’ll give you the treatment you deserve.

But one can only take in so many kittens. I couldn’t possibly buy and make over all the wonderful old houses that sit so alone and desperately in need of TLC and good families to build memories and create new stories in them. Even so, the heart isn’t practical. That soft center inside my heart will always reach out to every boarded-up, uninhabited house, wanting so much to give it a new lease on life. No, I don’t get (too) excited about clearance signs in shopping malls. But my pulse accelerates at every “for sale” sign in the front of a classic home. Maybe, I think, I could just buy it and rent it out so someone else could enjoy it…