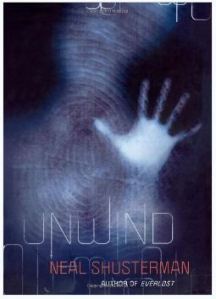 Although I write book reviews on my review website, Rated Reads, sometimes I’d just like to take a little time to write extra about the books I’ve read and put them in context in other ways. After reading Neal Shusterman’s UnWholly, the sequel to his young adult book Unwind, I find myself having to wax eloquent and enthusiastic about this series.

In brief, Unwind introduces a future in which there has been a war between pro-choice advocates and pro-lifers. It is ended when the two sides come to an agreement in which abortions are outlawed, but teens may be “retroactively aborted” or “unwound” by essentially donating their organs and ALL of their body parts. Whoa! What a concept! I love to read books that have compelling, original premises, and it thrills me when the authors are skilled enough to be able to execute those ideas perfectly. Neal Shusterman has written quite a few other young adult books, including the popular and well-regarded Skinjacker Trilogy (which I have yet to read but have heard good things about), and he also writes screenplays. So he was the right man for this job, with experience and skill.

I was introduced to Unwind by a friend, who had our book club read it, and it was a great book to use for that purpose: it’s interesting and fairly easy to read, but it is so thought-provoking that it provides plenty of material for discussion. UnWholly continues the series very well, keeping up a fast pace filled with action, and introducing new characters and new ideas that are ripe for dissection. What’s particularly interesting to me is that Shusterman doesn’t seem to have a clear “agenda” in that he’s obviously pro-life or pro-choice; he allows readers to just think about all the issues and ramifications of the choices that have been made by those two groups and society as a whole in this imagined future.

What’s nice is that Shusterman also chooses not to fill the books with bad language, vulgarity, sexual content or gore, which plenty of writers out there would certainly be tempted to do to give it “authenticity” (I’ve already discussed my feelings about THAT). There is occasional bad language and some violence, but it’s not too detailed or gross, just enough to get the point across and move along the action and plot. Good going, Neal!

This series is great for teens and adults alike, for entertainment and for the seeds of a good discussion about a variety of moral and ethical issues. Honestly, I think this trumps The Hunger Games for a few reasons and should get more attention because of that: it’s just as action-filled, compelling, and exciting, great for guys to read as well as girls (’cause honestly, there aren’t necessarily as many popular books out there geared towards teen males as there are toward female readers), but it has more elements that give food for thought. Hunger Games makes one think about the excesses of government and the concept of reality shows gone too far, but after that, it is just a good story. But Unwind and UnWholly continue to provide topics for discussion and pondering as the stories go forward, not just giving pause for thought with their premises. I’d definitely recommend this series for anyone who loved Hunger Games.