I was appalled, but not surprised, to read this morning about Alabama state Rep. Alvin Holmes’ comments during an abortion-related debate last month. As Yahoo Shine wrote, “In addition to claiming that 99 percent of white legislators would force their daughters to have an abortion if impregnated by a black man, Holmes also said, ‘I will bring you $100,000 cash tomorrow if you show me a whole bunch of whites that adopted blacks in Alabama.’ … Now he may need to head to the bank, as families who have done just that staged a press conference at the Alabama State House Wednesday.” 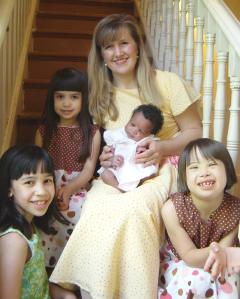 As a family who ourselves lived in Alabama for 12 years and, while living there, adopted a black baby (born in North Carolina), I have so much to say about this topic (and all the topics branching out from it) that it’d fill pages and pages of blog posts. But I think what I’d like to focus on today is racism. That’s at the core of this.

Here’s where I come from on race: I am white. I come from a very white family raised in the Northern United States. My parents are from Ohio and I lived the first 10 years of my life in Pennsylvania, where I remember seeing so few blacks that each “sighting” was cause for actually remembering each incident. This was in the 1970s, mind you, and things likely have shifted since then, but this, again, is my story. Then I moved to Mississippi when I was 10 and then on to Kentucky. But I had plenty of opportunities to spend time with blacks from then on. My take was this: hey, they’re people, and they have a different skin color. OK. So? On to other things.

My husband is Filipino. Asian. Not white. He felt keenly enough at certain points in his life the fact that he was a “minority” in the United States in the places he lived, particularly his two years in Utah, where we met at college. He stood out among the majority of whites there and was all too aware of that. Funny note about that: when we met, he owned and frequently wore a black cap with an X on it in reference to Malcolm X. Suffice it to say because of his minority status, he empathized with African-Americans in America and their history and status. When we dated, I read The Autobiography of Malcolm X and Coretta Scott King’s story, My Life with Martin Luther King, Jr. and found them fascinating and informative.

My husband was always a bit surprised that I just didn’t “care” or “notice” that he wasn’t white like me. Despite my Northern, white, homogeneous background, my parents had still taught us that people’s race just didn’t matter: we’re all people and deserve to be treated as such, equal human beings.

Then he and I moved to the South together. We ended up spending 12 years in Alabama, mostly in a small-ish town called Anniston. There, my husband had his first experience living in a place where the so-called “minority” was actually in equal numbers to the “majority.” Don’t ask me census numbers, but there were plenty of blacks.

There, we saw how separate the races still were in many ways, how many of the poorer, not-middle-class blacks lived on one side of town and the whites on the other. How the schools had essentially become segregated again because the middle-class whites had moved to different areas and were joined by some blacks who were also middle class and well-off enough to do so. We lived “in town” and went to those schools that were majority black. And I was fine with that. I refused to be part of “white flight” for a number of reasons.

But we also saw the other side of the story, one few people talk about, that blacks themselves are far from being immune to racism. On far too many occasions, blacks would look at my husband, the Asian who was truly a minority there, and call him names related to his race. I was absolutely shocked. How could these people who had been so horribly mistreated and still were largely in worse shape economically than whites in that area of the country not have more compassion, more understanding, more empathy, for the feelings and perspective of someone also a minority? When given the opportunity, they acted just as badly.

It’s great that there are black leaders in government. That’s the whole idea, that the U.S. has a representative government. But if black representatives, who supposedly speak for their constituents and act on their behalf, have such ridiculous notions of race relations as Rep. Holmes (and believe me, this is not an isolated incident), what are their constituents thinking and feeling and saying? (No, I don’t think all his constituents agree with him, but I doubt it’s just a really tiny number that do.)

Yes, the United States, particularly the American South, has an abominable history when it comes to race relations and the treatment of blacks. I just happen to be in the middle of reading Sue Monk Kidd’s latest novel about slavery in the early 1800s, The Invention of Wings, and the unspeakable things that were done to humans then still astonish me and cut me to the core. There are no words for how I feel about those things. But human beings, with our capacity for love and goodness and wonder, still have ugly capacities as well. And those capacities did not end with the abolition of slavery or with the Civil Rights laws enacted in the 1960s or anything that has improved since. Whites and blacks and any other race still have the capacity for ignorance and prejudice and saying and doing ridiculously stupid things. Holmes is just the latest example of this. When we push and hope for a “color-blind” society, our efforts can’t be focused just on whites; blacks and any other minorities need to be included as well.