Since I wrote about my Kindle earlier this week, I thought I should follow up with an ode to the other gadgets that get me through each day. I do a few things often and well: I read, I write and edit, and I cook and bake. That leaves me either sitting on a couch or reclining in bed (reading), sweating on an elliptical machine (reading), sitting at the computer (writing and editing), or standing in the kitchen (cooking, cooking, cooking and baking). Add in running errands, shopping, picking up kids and sleeping, and that covers a good deal of my life.

I cook most meals for my family. I like to bake muffins for breakfast or throw some pancakes on the griddle; I usually make up some quesadillas, hot dogs or sandwiches for lunches, and for dinner… well, the possibilities are endless. Thanks to my fairly recently added account on Pinterest, I’ve added on all kinds of new items for dinners. And while still on the topic of my Kindle, it has made it really easy to just take my Pinterest recipes straight in to the kitchen for test purposes, without even having to print anything out. (I always wanted all my recipes in some kind of easily accessible electronic format, and while this isn’t quite that, the Kindle has moved me a step closer to it.)

For dinners, almost any cuisine makes its way to my kitchen. I’m very lucky that my girls are all pretty good about eating almost anything I make (exceptions: none of them like scallops, the youngest doesn’t particularly like asparagus, and they don’t like any kind of ethnic fare to be too spicy), so they have eaten Thai-inspired cuisine, Mexican, Chinese, Japanese, Indian,  Filipino… you name it. Much of what I make involves a fair amount of prep work, mostly chopping and slicing of vegetables. (We go through a lot of onions and garlic, and during the winter — soup and stew season — a lot of carrots and celery too.) I bake bread loaves and make all kinds of bread products, whether they be “quick” or yeast-based.

Without the proper tools, the prep work involved in every night’s meals could be overwhelming, potentially leading me to just stop cooking and resort to fast food or mostly prepared food from the supermarket. Since I don’t like those options for the basic reasons of expense and health, I have stocked up on gadgets to make my work easier over the years. This week, for instance, my husband has two occasions to shop for me: Mother’s Day and birthday. I’ve made it a little simpler for him over time by requesting kitchen doodads for gifts. My most recent acquisition was my mandoline (Valentine’s Day: isn’t it romantic?). Sure, I have choppers, and a Cuisinart food processor, but none could slice potatoes or other vegetables nice and thin. So it was time to get a good mandoline.

I did a little looking around at reviews other buyers wrote about mandolines, looking first at Williams-Sonoma, and found that a simple Oxo $40 model was preferred by many of them. That’s amazingly what my husband brought home for me from Bed, Bath and Beyond. 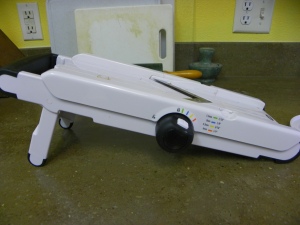 I use it primarily for potatoes. It’s perfect for making gratins and just perfectly thin-sliced potatoes for frying on the stovetop. It’s also great for cutting french fries. In my three months of owning it, that’s been my big use, but I’ve also used it for slicing up a bunch of vegetables for a salad. It supposedly juliennes, but I haven’t had the success I’d like to see in julienning carrots. But most of the time, I don’t do much julienning, just shredding, which leads me to …

I didn’t get this until just a couple of years ago. The main reason for that is I was able to find a very nice mini processor 15 years earlier for only $20 that fit my budget much better than the Cuisinart. That mini processor shredded and chopped pretty nicely, and I was very happy with it. Unfortunately, it finally bit the dust and I went out in search of a replacement. I found this Black & Decker, which had not just the chopping capability (most of the mini processors I found were merely mini choppers) but also shredding capacity. But when I got it home, I found that the shredding setup was lousy and it never worked right. 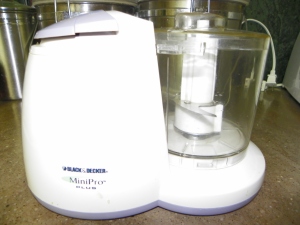 So I don’t recommend this one. In fact, right now I can’t recommend a particular mini processor that both chops and shreds. I just miss the old one that died after a pretty decent life span of 15 years (which is an eternity in this day and age of electronics). At any rate, I kept it because I think I couldn’t find the box or receipt or something. And it does work very nicely for quick chopping of items like nuts, onions, garlic and celery. In fact, I think it’s much more effective than my big Cuisinart.

So since the mini chopper didn’t work for shredding, and sometimes I just really need to shred large quantities of carrots or cheese, I got the Cuisinart. I’ve enjoyed it quite a bit for those uses, and it’s been nice to finally have a full-size food processor that can puree/blend. It’s been great for a number of uses I just had to do by hand or figure out how to do with some other gadget before I had it. Note: don’t try to chop in the Cuisinart. It simply doesn’t work. When I first got it, I made a nice Mexican layer dip with beans and guacamole and salsa, and I tried to “chop” my garlic and onion in there for the guacamole. What I got was pureed onion, not chopped. And it was far too much for the avocado to handle. It was like onion dip instead of avocado dip. Nasty. But I’ve made some recipes that are based on quinoa or beans instead of wheat (for gluten-free friends or just for a kick), and pureeing the beans or cooked quinoa in there, along with the other items in the recipe, has worked fantastically. It’s made for that. I’ve also used it to puree the plums from our tree to make jam. Perfect.

I also had a little non-electric chopper I use kind of alternately with the electric mini processor. This one’s an Oxo; before I had a model from Pampered Chef. Both work fine. The PC one just broke after a while, and this one, while still working after a couple years, won’t adjust to lock so I can clean it more easily anymore. So it’s a pain to wash.

It is very effective on the same kinds of things: onion, celery, garlic, nuts. Main difference is how it’s set up and that it uses hand power (if you’re feeling aggressive or annoyed, just bang on that a few times and you’ll have gotten out your anger AND chopped your food very finely). It also allows you to chop right on a cutting board rather than having to pick up the items and put them inside of a machine’s bowl.

Now, the workhorse of my kitchen counter is my Kitchen Aid stand mixer. 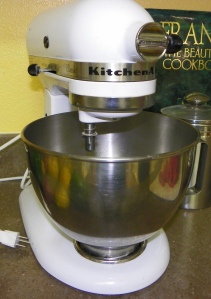 I was very fortunate to get this one for only about $140. I got a basic model at Wal-Mart, and my mom worked there at the time, and at Christmas she would get 20% off one item. She let me use that discount to buy this, so after its initial reasonable price and the discount, I was only out $140. But it’s definitely worth $200. I use this every day. Before I had this, I thought I’d always be content with a hand mixer, but then one day I tried an amazing recipe for a decadent chocolate cake I found in the Oprah magazine. The buttercream filling requires beating for 10 minutes, and drizzling a sugar syrup into the filling while it’s being beaten. It’s very tiring with a hand mixer. That was kind of the last selling point for me to get that Kitchen Aid, and I’ve loved it ever since. I use it for cookies, cakes, and doughs. It’s very handy for making pizza dough. The recipe I use requires kneading for 5 or 10 minutes, so I just get it going and let it knead while doing other stuff. (I will say that I never use this for my homemade bread. It just needs real hands working it hard. But this is one of the few things I do knead by hand still.)

You can probably tell just how fond I am of these gadgets. And I have more … I just won’t go into detail about every last one of them. (The ice cream makers probably deserve a post of their own.) In this age of busy-ness, and the stage of my life in which I have four children at home, who are off to different places and activities, and in which I have all kinds of projects of my own on top of that, having these amazing time-savers is wonderful. It means a lot to me to serve healthy, yummy, homemade meals to my family, and these electronic helpers are my little kitchen elves.