I’m beginning to think that most news outlets are forgetting their news roots. I’ve long since given up on watching any kind of TV “news” programs. Those seem to have left behind reporting news and facts, replacing journalism with who-can-shout-louder editorializing. Magazines don’t seem much better. Time magazine has just proved that with its newest sensational cover about attachment parenting, asking “Are you mom enough?” 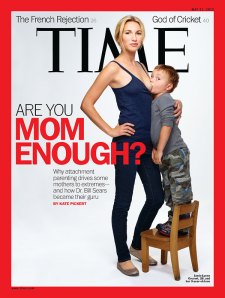 I’m not going to dispute that reporting about the practice of attachment parenting, and some facets of it that seem “extreme” to many parents out there, is a fascinating idea. But I am not happy with the cover, and many people are not, but there are all kinds of reasons that it’s getting attention, mostly negative.

Now. On to why the cover does bother me. Time has deliberately chosen subjects to portray that will garner attention, and the artist has posed them in a way that will grab viewers. First, I think it’s interesting the magazine chose a very thin mother who looks like she should be a lingerie model to demonstrate breastfeeding in the preschooler years. Even though this is a real mother and child who are still nursing, the mother has been chosen to reflect a sexualized image of a model. Second, the way the photo is posed isn’t what I would guess is the usual way this mother and child (or others) would take some time to nurse. Having the mom standing up, posed like a model in an advertisement, with her son standing on a stool is pretty unusual. Most likely, this mother takes a few minutes at the end of the day to sit or lie down to snuggle with her son to allow him to nurse, and it’s part of some quiet, private, mother-child personal bonding time. And neither would be looking away from each other, especially not at a camera.

What bothers me in addition to how Time has chosen to represent this topic is the reaction that it is guaranteed to cause, a negative one about breastfeeding. Even though the topic is about an “extreme” version of parenting that many of us don’t choose, this photo is essentially painting nursing with the same wide brush, and it’s going to be a setback in the still-needed push forward to make nursing more understood and more accepted in public society. That bugs me.

Having given birth to three children and nursed them all for periods of about 10 months up to about 13, I think, I know what it’s like to be a nursing mom. It’s a challenge because you’re ALWAYS on call, always needed, and this particular duty cannot be handed off to the dad or anyone else who could help. (Let’s leave out the topic of breast pumps right now and keep this simple.) I know the difference, too, because I adopted our last daughter, so we fed her formula, and man, was it nice to be able to let everyone in the family take turns feeding her. I was so free, compared to when I was tethered to the previous three by my milk supply! Add in issues that may come up with nursing — sore breasts, sore nipples, infections, what-have-you — and it’s tough work, on top of all the other things that are hard about mothering a baby or toddler.

At the same time, breastfeeding is pretty cool. I wasn’t the “natural mom” type who always gushed about how great it was to nurse, sometimes just complaining about that constant on-call thing, but I did appreciate the benefits. It was the neatest thing to know that my body was producing exactly what my babies needed, just at the right times. I was happy to make the sacrifice to nurse because I knew it was the absolute healthiest thing I could do for them. And snuggling up with them and having it just be their little soft mouths on my breast was a gift. It was just the two of us, skin to skin, and I treasured (some of) that time. (Sometimes/most of the time I just got it over with because it was feeding time and I had to move on to something else. No, I don’t treasure every single moment of life, parenting or anything.) When I gave birth to my last daughter, I knew that would be the last time I’d breastfeed, and having her latch on that first time in the hospital almost brought tears to my eyes because I knew that it was special, and not too long in the future would be the last time I ever nursed a baby.

I also know just how tough it is to nurse a baby when you’re not at home. I was raised to be modest, and still teach my own children to be modest and not show too much skin, so the idea of the possibility of any of my breast showing even for a split second in public was one that was completely opposite to that notion that was so ingrained in me. Plus, I’d never seen almost anyone out and about just nursing a baby, so doing that myself while out shopping or eating at a restaurant or running any of the myriad of errands most people do in the course of everyday life felt strange. I felt like everyone would be staring at me, no matter how discreet I was. Even in my church, where we have more children than average per woman, and where many of us breastfeed, there’s one small room set aside for nursing and taking care of babies, and I’d never seen anyone nurse a baby outside of that room, even when we were in a meeting that was just women. Thinking about it now, I still think it strange. Why in the world do young mothers surrounded by other women of various ages, most of whom probably did nurse, feel the need to leave a room full of other women to isolate themselves in a tiny room in a corner and miss out on uplifting messages? Modesty? Self-consciousness?

Nope, our society is not at ease with the idea of women nursing their babies where anyone can see. Ask any of us women who have had to try to nurse a baby in a bathroom stall (can you say ick? Would you want to eat your lunch in the bathroom?) because there was nowhere else private to do so if we’d like to see more acceptance of breastfeeding in public, and we’ll respond with a very loud and hearty YES!

I find this all so ironic because our society is so highly sexualized. Women of all ages, teen girls, and even 9-year-olds wear revealing clothing without almost anyone batting an eye anymore. Scanty tank tops are certainly normal, and sleeveless dresses are the standard for any fancy occasion. (Try finding a dress for a nice occasion with sleeves that doesn’t look like a grandma dress. Good luck to ya.) Not only celebrities sport revealing clothes: everyday people wear plunging necklines and show a lot of cleavage and breast skin. Yet women who are feeding their babies the way nature intended, with the healthiest possible food made JUST FOR THEM, are stared at and marginalized if they accidentally show any skin for a split second, or (heaven forbid) show part of their breast at all while nursing (I always preferred to be completely covered, and there are some really handy nursing cover-ups, but what’s wrong with letting a little of the top of a breast show while the baby’s head is covering most of it?).

Breasts have become, in our society, simply an object of sexualization. Women have breasts so they can feed their babies, and, yes, they are alluring and exciting for men. That’s natural as well, and part of the whole important biological process that brings new people into the world and feeds them in the early stages of life. Breasts are really useful for feeding, but they’re also fun for men and women as they come together to feel close to one another and to reproduce. But we have lost sight of the fact of their usefulness, seeing them ONLY as sexual objects. So if we see women with a baby attached to them, because of this cultural pattern today, we think “eww” because we think of them exclusively in sexual contexts.

So Time has not done nursing mothers any favors with this magazine cover. Nope, with the choices it made that I already mentioned, it has shocked viewers and made them feel revulsion. What we need as a society is to do better to educate everyone, male and female, about nursing and the great usefulness of breasts, to encourage women to use them as they need to with their babies wherever they are, and however they feel comfortable nursing. Our society has everything backward, upside-down and inside-out. Let’s help encourage women to be more modest and show less skin on an everyday basis, saving sexual behavior for the privacy of the bedroom. But let’s also encourage women to feel free to use their breasts to feed their babies, even in public, and not force them to stay at home or run for cover (especially not to a bathroom!). Parents can teach their sons and daughters about nursing and how the body works in so many amazing ways, and women who are nursing can show their other children and friends how it’s done. It’s just going to take lots of women being comfortable enough in public to feed their babies so everyone can get more comfortable to the sight of nursing moms and babies.

Time, you let us all down and did a great disservice. Stop sensationalizing and show us how things are really done.