So I was appreciative this week to receive a book to review called Pros of Prozac: A Faith-Based Memoir of Overcoming the Stigma. Given my experience in book reviewing and my personal interest in mental health issues, this book was a welcome read. 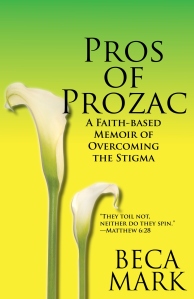 It’s a little slip of a book, just over a hundred pages, which the author says is mostly intentional, so someone interested in the topic can just get a quick overview of her experience. So I read it in one sitting this afternoon. Beca Mark writes about her experience with postpartum depression after the birth of her first child, struggling with mood and depression, and finally deciding to seek professional help and take medication for her depression. It took 15 months to choose to take Prozac, and Mark discovered two things: one, why did she wait so long while suffering so much? and two, she realized that she had actually been struggling with depression her whole life but hadn’t known it until Prozac made her feel really good and really herself.

Mark’s experience is actually what I would call fairly straightforward. She was really struggling, and then struggled with just the concept of taking medication because of the stigma it has in our society (and the real lack of open discussion of the topic in her otherwise close-knit, very large family), and then finally decided to give in and take the medicine. And in fairly short order, she just felt a whole lot better. And she has felt consistently better in the years she’s been taking it, which I’m guessing is probably about five. She makes clear that it hasn’t made her life easy-peasy or super-simple or solved all her problems. It has simply made her more able to think clearly and be motivated and to just be her best self. As I put it, it’s helped her to be able to cope in the way that most “normal” people (i.e. those who don’t have depression or other mental-health struggles) do.

Mark says this is a faith-based memoir, but it’s really not very heavy on the faith angle. I think her beliefs and the culture that surrounds those faith beliefs give a frame to her story, but even those who don’t consider themselves very religious can find a lot of value in her story. All in all, this is really a simple tale, and one that seeks simply to provide some basic information and encouragement to those who may find themselves struggling emotionally but feeling hesitant to accept that there might be a “label” for what they’re experiencing and that medication might help. Our culture at large still places stigma on mental health issues, as well as taking psychiatric medication. And individuals within faith communities may very well sometimes compound that stigma by saying that if a sufferer could just be more self-reliant or more faithful, they wouldn’t suffer.

I heartily support Mark’s goal to contribute to the general discussion and bring this topic “out of the darkness” into the light of day. The more those of us who do struggle with emotional challenges really talk openly about this and show that we’re pretty normal, typical, “good” people, and not weird or weak or something negative, the more others will be better educated, aware, and accepting — and supportive. And, even better, the fewer the number of people who do suffer from mental health issues will feel marginalized or hesitant to seek treatment. Mark really doesn’t want more people to suffer in silence and without treatment. Why should they? It’s pointless to suffer when there is help.

In applying Mark’s story to my experience, I find that mine is a bit more complex. (She does say that mental illnesses are complex in cause, etc.) Because I have bipolar issues, finding medications and treatments to keep me on an even keel can be trickier. Antidepressants help the most, but they tend to “poop out” after a year or two. I’m in that spot right now, I think. I have been on a number of different medications over the years, and it hasn’t been as “simple” (that’s relative, I know) as being able to get on Prozac and stick with it for years. I would like that a lot if it were that comparatively simple.

When it comes to the faith angle, I just wrote that there really isn’t a lot of it in here, so this book is really accessible for everyone. I wouldn’t have minded seeing more, personally. I have written about how my faith informs and is affected by my mental issues, too, and I don’t think Mark really digs into that as much as I have, even.

But bottom line: a good read, particularly for those who are “new” to the idea of having possible emotional struggles, and one that’s simple and straightforward and encouraging. Kudos to Beca Mark for putting her story out there and just being honest. The more of us who do so, the better.